skip to main | skip to sidebar

Watch little Jessie sing and dance this Hip-Hop Cumbia "Gorila". Jessie is with the Network for Young Artists in San Antonio Texas.

Hear commentary from Patsy Robles, Executive Producer for 411 Productions, about the fight in the U.S. to keep Public Access Television on the air. 411 Productions and the 411 Show is a non-profit organization that teaches youth how to produce their own media content. The shows air on cable public access television and as a videoblog.

Meet Producer Patsy Robles from 411 Productions. 411 Productions produces the 411 Show for public access television in San Antonio and as a videoblog.

Hear the 7 minute news story by reporter Abra Schnur that was run by Texas Public Radio on May 18th, 2006, concerning the Public Access Television issue in Texas. Click on the link below. This is an audio file only, no video on this. You can use Windows Media Player or Quicktime.

Empowering Youth with the Media Arts

On Thursday, May 18th, 2006, a small group of Public Access Television Producers in , went to the City Council Chambers to air once again, their outrage that the Public Access Channel 20 in was still black (not broadcasting). We had only one public access channel in where local citizens could produce television shows that could be aired locally. The channel had gone off the air on January 1st, 2006, due to the state legislature passing Senate Bill 5.

If you need more background information on what the problem with Public Access Television issue is about, see our previous postings in this blog starting from December 2005, when we 1st realized the danger we were in. Bottom line, is that Public Access Television is in danger of being lost, not just in , but all across the It is the only local outlet that ordinary citizens who don’t have the resources to rent production studios and film equipment, have, to produce and broadcast on television locally. This is funded with a 1% franchise fee that is charged to paying cable customers, and is turned over to the City for use for PEG (Public Access, Educational, and Government) broadcasting. The money to fund these channels comes from us, the paying cable subscribers, not the city or the cable companies.

One must understand that what is occurring here in is not an isolated incident. This scenario is and will continue repeating itself in other cities in the , one by one, as their current franchise agreements end, and if their state legislature has passed law(s) to make this drastic change. This is being done very surreptitiously. These laws are being lobbied to our state politicians by the cable/telecom companies, because they don’t want to have to deal with cities on an individual basis. In the end this endangers localism, which is how we are able to see and hear people in our own cities and neighborhoods on TV other than on the local news channel, and we all know what the local news consists of.

is going through these same hard questions right now as they are realizing the danger their public access channels are in. The legislature has been lobbied on this. A few other states have already passed these new franchising laws in favor of the cable companies negotiating on a statewide basis. This is becoming a model for the future, and this is not good. This leaves me and you, the common citizen, out in the cold, silenced and caught in the storm of who is responsible for the airing of public access. What has happened in is a prime example of the damage than can take place and we all need to realize that “There for the grace of God go I.”

Empowering Youth with the Media Arts 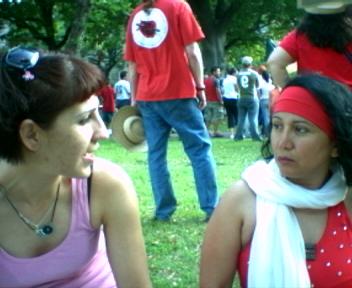 DeAnne Cuellar (left) with Texas Media Empowerment Project, (texasmep.org) and
Patsy Robles (in red) with 411 Productions (411show.blogspot.com) at the May 1st, 2006 Immigrant Rights Rally.
Posted by The 411 Show No comments: 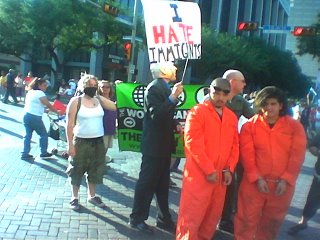 Actors from World Can't Wait (www.worldcantwait.org) at Immigrant Rights Rally, May 2006
Posted by The 411 Show No comments: 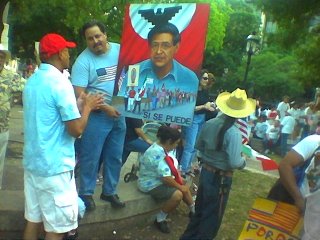 The 411 Show
The 411 Show started as a Public Access Television show in June 2004. The show features youth, in a talk show format, discussing issues that affect our world today. We also feature young talent in a variety of performances and showcase video shorts. There are rotating hosts and guests. The show is produced by 411 Productions, a non-profit organization dedicated to educating youth and the public on Media issues and teaches media production, so youth can have a voice in the media they watch. The 411 Show currently airs on San Antonio Public Access TV Digital Channel 20 (Time Warner) and Channel 19 on Grande Cable, Thursdays 8:30 pm and 12:30 pm on Saturdays in San Antonio Texas, USA. The Show also has an international viewing audience via sites such as YouTube and Blip.TV.